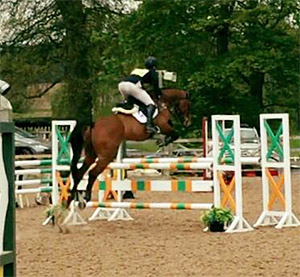 With Let It Bee accepted for Badminton Kathryn opted for a steady double clear following a solid 34.3 dressage test in an OI. Even so the pair finished 10th. Linus V also gave Kathryn a rosette, placing 6th in a novice section.

Meanwhile Gio had four to ride, with Duke of Champion (pictured) providing the win of the weekend – despite a rail down in his intermediate class. Also with a rail down in the same section, Spezific One finished just outside the ribbons in 11th.

Stilo Kontika had his first run since last summer, jumping double clear in an open intermediate, but with Gio keeping his foot off the accelerator.

Finally Duke’s Sunny Boy made the step up to novice, scoring 34.8 for his dressage to which he added a rail down and some cross country time penalties – a very good first attempt.