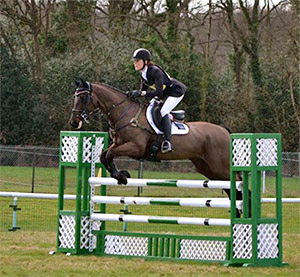 Giovanni made his debut outing on Spezific One, a horse previously competed by Bill Levett. They ran in the open novice, jumping a nice steady double clear after posting a sub-30 dressage score – a good start to their partnership.

In contrast Kathryn was out with Let It Bee, doing the dressage and showjumping but withdrawing before the cross country.